Last week I went to E3 (the Electronic Entertainment Expo) for the first time. A lot of people in the gaming world associate E3 with the developers’ press conferences and that’s what sticks it people’s minds: trailers and gameplay for new games, release dates being announced, etc. The press conferences happen before the actual expo, though – this year there were press conferences on Saturday, Sunday, and Monday (along with Nintendo’s on Tuesday morning) before the expo itself opened to press Tuesday morning and then to the public who had bought tickets Tuesday afternoon. Tuesday through Thursday both media and enthusiasts were able to wander the halls of the LA Convention Center and play all the hottest upcoming video games.

This hasn’t always been the case, though. In fact, up until last year, E3 was a media-only event. 2017 was the first time that people who weren’t a part of gaming press or associated with the industry were allowed to attend the expo. There’s was an experiment in 2016 called “E3 Live” which was a separate event – the public could attend (for free) a separate event where games were available to play, but the main E3 was still closed off from them.

As a person who has followed the E3 press conferences for many years and has also attended some other different conventions related to gaming (including MAGFest, RTX Austin, and PAX West) I felt like it would be fun to actually attend E3 this year and write about it. After all, who knows whether they will keep E3 open to the public in the future. So for this first article, I will be discussing the E3 event itself and how it felt to be on the floor. I will post a second part later this week that talks about the games specifically that I played along with other trailers I’m excited for.

This year there were several conferences: EA, Ubisoft, Bethesda, Square Enix, and Devolver all had their own conferences in addition to the big console names: Nintendo, Sony, and Microsoft. The conference events were streamed live, but to attend them in person you had to be a part of the media (they are technically press conferences, after all). This is where almost all the announcements for upcoming games were made – so by the time I was in line Tuesday to enter the convention center I had a good idea of what would and wouldn’t be on the floor for playing.

It’s also where most of the orbiting media gets their clicks and views. News outlets, YouTube channels, and everyone in-between were writing up responses, posting reaction videos, having live streams and live interviews before the expo floor had even opened. It’s a crazy week for anyone in the games industry as everyone involved with video games gets super hyped. Even on my plane ride to L.A., a woman sitting in my row commented that her and her boyfriend were excited to see what Bethesda said about Fallout 76 at their conference since they were fans of the series and (at the time) there were only rumors on whether it would be online multiplayer or single-player. So it’s no surprise that as conferences roll out, every source of games media is pumping out content non-stop prior to the doors of the expo opening.

The first day of the actual event was truncated for the public: doors to E3 opened at 9 AM for the press and media, but regular attendees didn’t have access on Tuesday until 2 PM. Since time was short and there was a lot to see, I personally only ended up playing one game the first day – Trials Rising, the newest Trials game from Ubisoft – and that was because there was only a 10 minute wait to play it since everyone else had flocked to all the bigger name games to try and play them first. 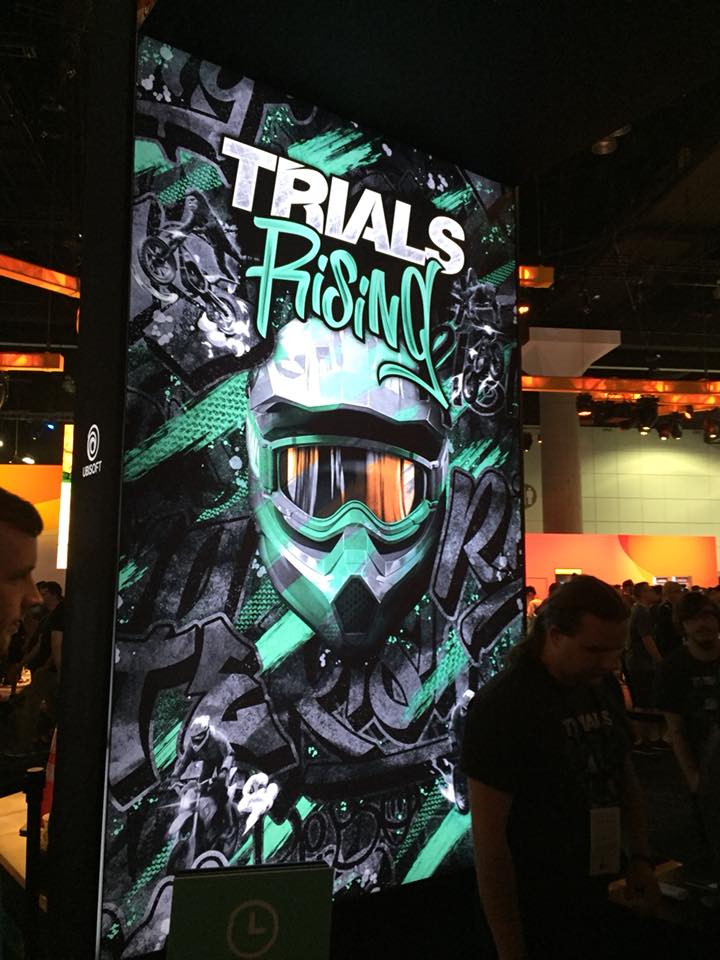 One of the most astonishing things that I saw were how many people bought tickets to E3 and then immediately headed towards publisher stores to wait in line to buy things. Lines at the Bethesda, Square Enix, and Ubisoft stores were as long (and in Bethesda’s case longer) than some lines to actually play video games. Yes, some were selling E3 exclusive merchandise but it was honestly surprising to see so many people waiting in a very long line to buy swag that – in most cases – were available online at their store when the selling point of the expo is brand new video games that haven’t been able to be played anywhere else.

But that was the biggest hurdle of all three days of E3 – the long lines. Every game had a line. The only times I had a short wait to play a game were for Trials Rising at the very beginning of the expo and when I tried Code Vein at the very end – and that was only because it was a lesser known game that was kind of hidden away while everyone else was trying to sneak in one last big game. Almost every other game I played I had to wait at least an hour to play and usually longer. The only other exceptions were Sony’s VR games, which I will get to in a moment.

The lines for certain games were crazy – Kingdom Hearts 3, for example, was the obvious game of the show as there was always a monstrous line. For most of Day 2 and Day 3, the people in charge of the game booths would start capping lines so they wouldn’t end up with an endless line of people blocking all the foot traffic of the game. Most of the capped lines would have signs that said “Come back in 30 minutes” and every half hour they would uncap the line, let more people in until it reached a certain point, and then cap it again. In comparison, Kingdom Hearts 3 had a line capping sign that at one point said come back in 3 hours.

Needless to say, I did not play Kingdom Hearts 3 at E3.

I did not get to play a lot of games at E3, actually. After a certain point on the second day, it basically became roulette as to whether you walked by at the right time and a line was uncapped so you could play the game. Yes, you could kind of hang around until the option was given to jump in but then you’re literally waiting in line to wait in line, and that’s just a little too much for me. Anything major that got lots of coverage – Spider-Man, Assassin’s Creed Odyssey, The Division 2, etc. – you either had to be the first in line when the doors opened or have an insane amount of patience. 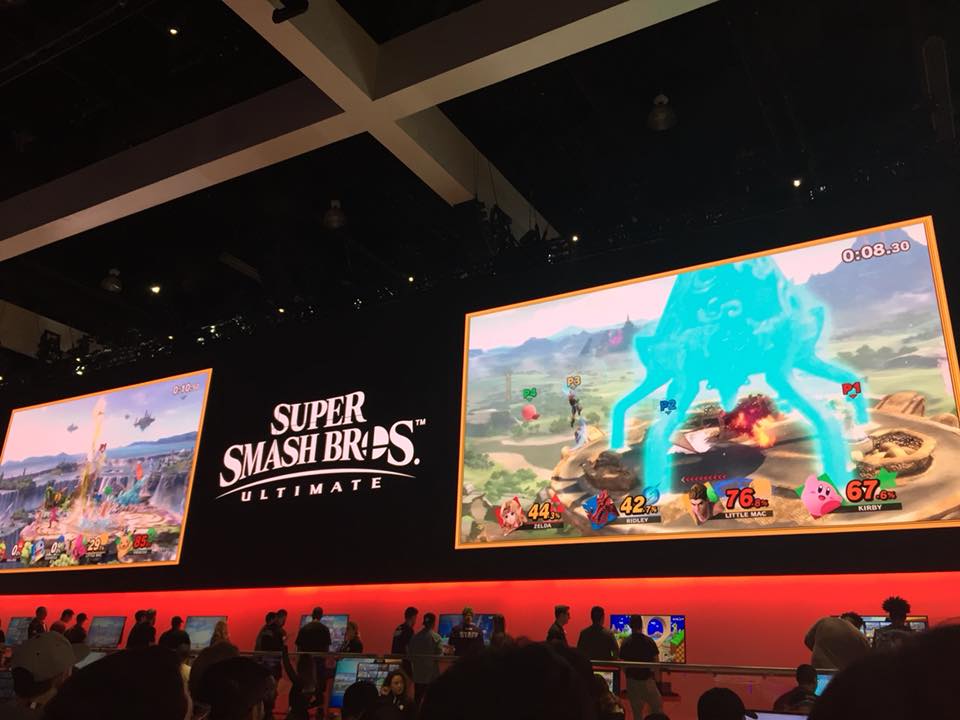 Sony had a slightly better thought-out system. They had an app called the Playstation Experience app where you could reserve times ahead of time for playing specific games. You had to link it to your PSN account to use it, but it helped immensely and you didn’t have to stand in line once you registered for a time slot through the app. They mostly used it for their Playstation VR showcase (all VR games had to be scheduled through the app) but they also had Black Ops 4 and the new Destiny 2 expansion to play on the regular PS4. There were specific times that were clearly communicated for when time slots would be open and it was first-come, first-serve, and you could only reserve one VR game per day. While there were some games that were more popular than others, it was still very easy for me to schedule two different VR experiences without any trouble whatsoever.

While it would probably be impossible to run the entire event like that, it was a breath of fresh air knowing I had an exact time and place to be somewhere and that I’d get right in and be able to play the game, as opposed to having to stand around in line for hours before getting the change to put my hands on a controller. I downloaded the E3 app itself hoping for something similar to Sony’s organization but couldn’t figure out how to get it working. It asked for a code or credentials every time I started it so I assume it was only for press/media people – this wasn’t communicated by the app in any way, though, and I couldn’t find anything on the website for instructions on how to use the app – only where to download it.

And that was my biggest gripe with attending E3. It’s very clear that this is still a primary media event. All the gaming news outlets, gaming podcasts, YouTube creators, etc. had a blast at E3. I saw people chatting it up in the Twitch Partner lounge, I saw many pictures of gaming industry people that I follow doing the same things I was doing. But they were also getting to play things like the Resident Evil 2 remake (not open to the public, only media) and see Cyberpunk 2077 gameplay (also not open to the public) which I assume were scheduled ahead of time just like my Sony VR experiences. A lot of booths had “press only” lines or sections where if you were an industry person you could skip ahead and see stuff that the general public couldn’t. Which again is fine – the gaming press should have more of a heads up on new gaming content than the general public – but it felt like the organizers of E3 had only halfway figured out how to allow the public to participate in the expo.

Opening up E3 to the general public is a good thing, but to me they felt short of making the E3 floor feel accessible to the public. There were touch screen computers scattered around the convention center that had maps of the floor, but you had to search for specific things you wanted. Only on the E3 website could you see where specific vendors were – and apparently Microsoft had some sort of showcase in another building that I wasn’t aware of until the last day, and I discovered that fact at the same time that it was apparently closed for the last day, too. They had the organization of capped lines but the disorganization of leaving a sign telling people to come back in 30 minutes and not indicating when this 30 minute timer had started.

Obviously this is only the second year that E3 has been open to non-games media. And I appreciate being able to experience it. But I also felt like I was an outsider at a convention I should have felt the most at home at. It felt like the gaming journalists and industry crew were the “cool kids” and we were kind of getting the leftover scraps after all the shock and awe of actually being there wore off. It just made me more determined to carve a place for myself in gaming media for future E3s.

So that was my experience on the floor of E3. Next time, I’ll go into a bit of detail about the games I played and what I’m looking forward to after the E3 conferences.