Last week I talked about my five favorite Robot Masters from the Mega Man series. Now, as a continuation, we’re going to be starting off February with the five worst Robot Masters! Then I promise to take a break from Mega Man for a while and thrill you with some other amazing Top 5s!

Without further ado, let’s get to those wily Robot Masters! 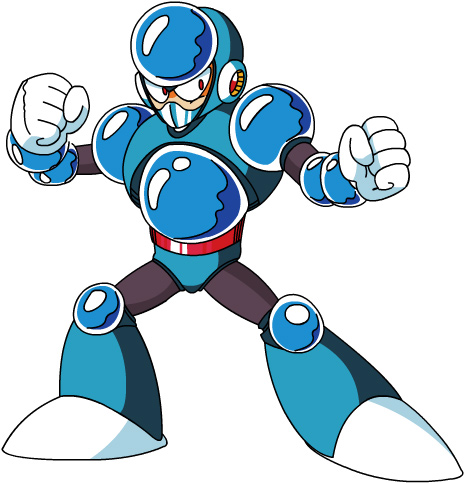 My beef with Crystal Man isn’t so much his design as it is his stage. I hate, hate, hate, HATE Crystal Man’s stage. As a kid, his stage gave me the most trouble out of any Mega Man game (including Quick Man’s infernal beams) and often times I would clear out every Robot Master but Crystal Man. And then I could never get past his stage and be so close yet so far from the endgame. There’s sections where crystals drop from the ceilings and can knock you into insta-death pits and I could not get the timing right on those sections.

So this particular Robot Master has always lived in infamy with me because of his stage. I actually kinda like his overall design and the boss fight itself isn’t too bad, but ugh his stage. Awful. So awful that he had to make an appearance in the top 5 even though there are a couple Robot Master designs I think are downright goofy and terrible, but their stages and boss fights weren’t too bad. If you ask me “what video game level always gave you trouble as a kid” I can say my brain would go to this stupid robot’s stage 90% of the time. You suck Crystal Man, find a better home. 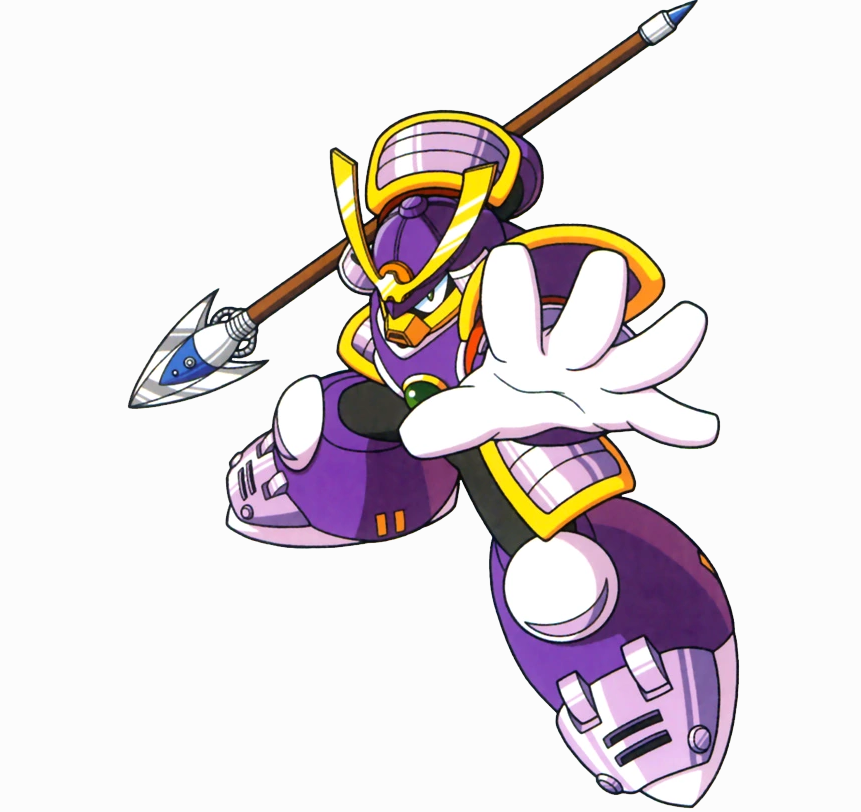 Yamato Man isn’t all bad. I don’t really object to his stage and actually the stage music isn’t that bad. It’s just…as a kid, I had no idea what the hell a Yamato was. And I’ll be honest, I’m still not sure. He’s supposed to be a Japanese samurai and I guess Yamato is (or was) a province in Japan, but seriously? Why not just call him Samurai Man at this point? Since that’s what he’s supposed to be in his design.

On top of that, he has literally the worst attack of any Robot Master. Unlike, say, Napalm Man, who has an infinite ammo code and can launch bombs at you indefinitely, Yamato Man twirls his spear around so hard that its head flies off at you. That’s the attack. And then to add insult to injury, he has to go run and pick it up! Like, he doesn’t have an extra spear head he can plunk back on his staff? Or like, maybe just melee Mega Man with the spear instead of being all “Oops, hey, lemme grab that real quick.” Ugh. What a dork and a waste of a possibly cool boss.

Just look at this loser. Like seriously look at him. What a terrible design. He’s one of the worst looking Robot Masters of all time. I hate the four petal design around his head and the way his helmet sits on his head just looks weird on top of that. And his weapon (the Plant Shield) is one of the overall worst shield weapons in any Mega Man game. Also, his attack loop is almost as bad as Yamato Man’s. He just makes the shield, throws it, and then runs around like a chicken with his head cut off. DO SOMETHING ELSE YOU MORON.

Oh, and he also has a terrible stage. I dreaded doing his stage every time I played Mega Man 6. I haaaaate it almost as much as I hate Crystal Man’s. But unlike Crystal Man, Plant Man does not have a decent design to back up his awful, awful stage design. So Plant Man is therefore overall objectively worse than Crystal Man even though I hate his stage slightly less in comparison. Bah. I don’t even want to bother insulting Plant Man because he’s not worth my time. Go away you stupid flower. 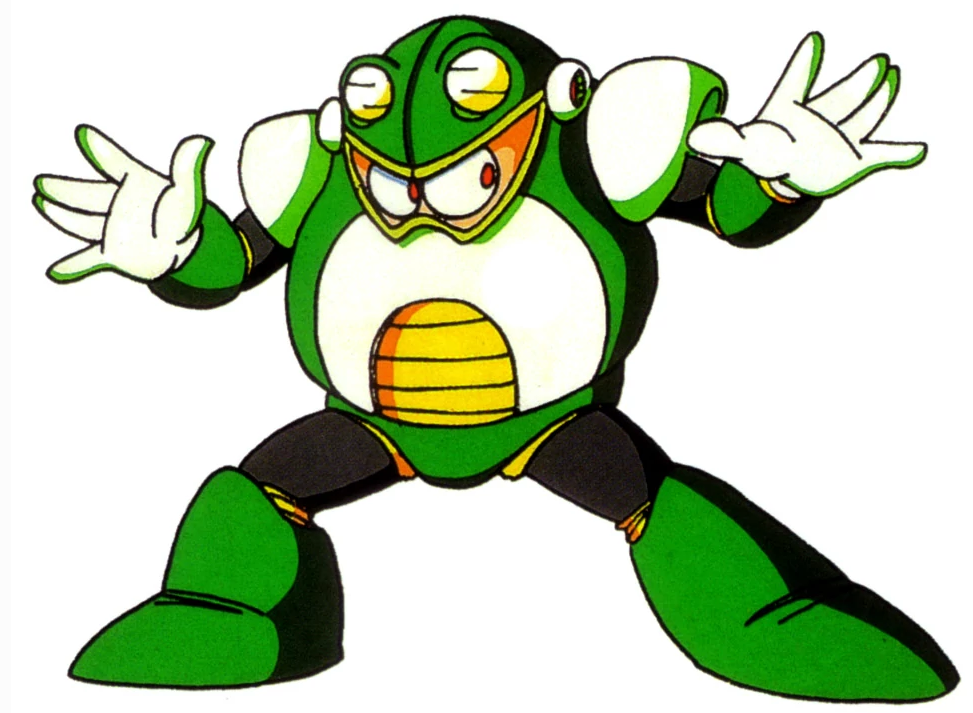 Nobody likes Toad Man. His big attack is he wiggles his hips at you like he’s the worst guy in the club trying to pick you up on the dance floor. His design is terrible. His stage sucks. He’s even the first boss in the recommended chain who is the easiest to defeat with just the Mega Buster, as if the designers knew he was terrible and wanted to make sure people killed him as fast as possible so they wouldn’t have to look at him on the stage select screen for too long.

Toad Man is a travesty of a Robot Master and is only beat out in the worst slot because voice-acting didn’t exist in the time of Mega Man 4. 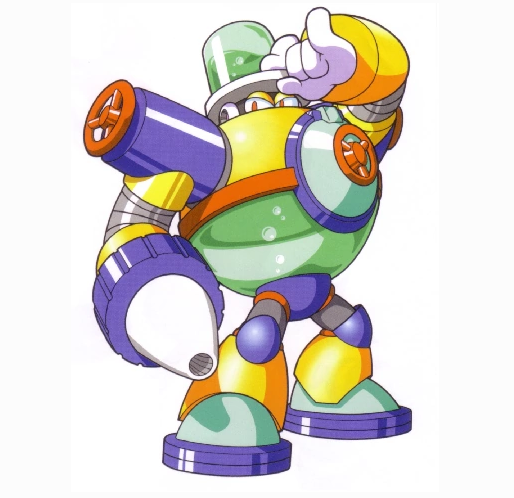 HOOOOLLLLYYYYYY CRAP I hate Aqua Man. And not in a “there’s a cooler Aquaman in the DC Universe” kinda way. I don’t give a crap about that or any sort of comparison between the two. Aqua Man is legit, hands-down, the most annoying Robot Master in the history of ever. He has the absolute worst voice out of all the vocalized Robot Masters and has the most annoying sound clips during his boss fight. Like, just watch this and tell me you don’t want to pull your hair out after fifteen seconds. Seriously.

The way he says “Water balloon!” and “Water cannon!” in the most annoying, high-pitched voice. He sounds like he’s going to butt in and correct your grammar while you’re giving a dissertation. He’s probably a “Nice Guy” on Twitter. For God’s sake, he says “Boi-yoi-yoing!” every time you hit him with your buster shots. WHY?! WHY IN THE INFINITE POSSIBLE UNIVERSES DO WE LIVE IN THE ONE WHERE THIS EXISTS?!

On top of that his stage sucks too. Not that it’s hard, it just plain sucks. The music sucks. The enemies suck. Like, Mega Man 8 is one of my least favorite of the Mega Man games mainly because I have to fight stupid Aqua Man every time. HE’S SO BAD. UGH. Just looking at his stupid face makes me want to break a Mega Man 8 disc in half just to assert free will. I hate Aqua Man.

Okay, so I got a little aggressive there in the end against Aqua Man, but he deserves it. Anyway, that’s it for Robot Masters. I’m sure in the future I’ll get to my favorite Mavericks from the X series but I’ll wait a bit on that one. Thanks for reading, and see you next week!