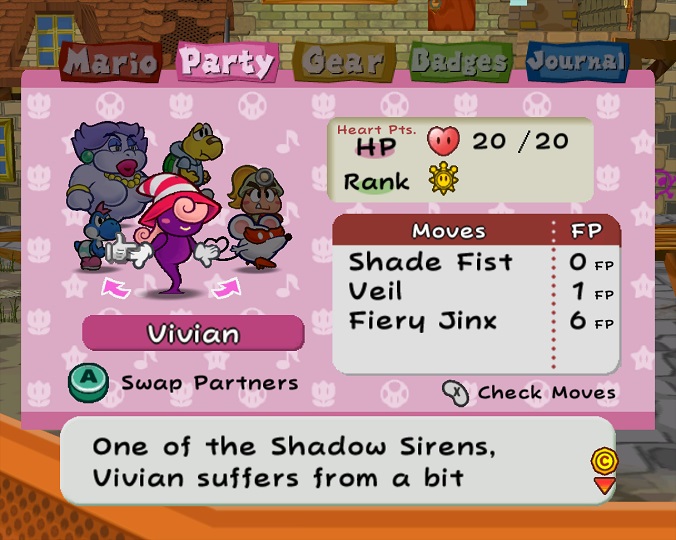 The GameCube sequel to Paper Mario from the N64. It follows roughly the same outline: you play as Paper Mario and gather party members as you progress through chapters of the game and explore different paper worlds. The turn-based RPG combat system is simplified so that the attack and defense numbers are easily digestible instead of numbers in the meaningless thousands. You can only have one party member assisting Mario in each battle and each helper brings different skills to the table.

There’s also tons to do in the overworld as you walk around between battles as Mario gains more paper-related skills as you progress, along with your partners having overworld abilities that can unlock new areas and secrets. The game also contains typical humor associated with Mario RPGs and has a lot of funny moments. It’s a meaty, lengthy RPG that turns into one of the best Mario spinoffs in existence.

As I stated in the Superstar Saga entry, I bounced off the original Paper Mario due to not liking the aesthetic and having a kneejerk young person reaction to the style change from Super Mario RPG. I wanted SMRPG 2, not whatever this paper abomination was. By the time Thousand Year Door rolled around, though, I had matured and grown up a little and decided to give the game a try.

Now I don’t remember exactly how I played it. I never owned a Gamecube, but my freshman year college roommate did. So I think what happened was he owned it, and over the course of freshman year at some point I gave the RPG a try and fell in love with it. However, I do have my own copy now and may have gotten it and played it on my Wii? I honestly don’t remember, time gets fuzzy. But from Rawk Hawk’s theme (and really everything about Rawk Hawk’s chapter) to the witty humor of the fresh buddies in the Mario universe, I was enraptured by the game whenever I did play it. It catapulted towards the top of my favorite RPGs of all-time and I honestly got mad at myself for judging the first Paper Mario the way I did in the first place.

For some reason, Magnus von Grapple is one of my strongest memories in this game. His theme is something that just pops into my head randomly for no reason. Maybe it’s because it’s delightfully robotic and has a weird cadence to it, but I really enjoyed battling him every time he showed up in the game. Him and Rawk Hawk are the two enemies I can immediately conjure when thinking about Thousand Year Door. Music strikes again.

But the character I have strongest feelings towards is Vivian. She is probably one of my all-time favorite Mario characters, even if she is just a one-off for Thousand Year Door. In all versions of the game except the English one, Vivian is depicted as a transgender woman. I, of course, consider her canonically trans regardless and she was my favorite party member even before I discovered other translations. I won’t deny that a big part of why I regard Thousand Year Door so highly is because of Vivian.

As I do a lot of these write-ups I really get the urge to play all these games again because they mean so much to me. Just talking about Thousand Year Door, Vivian, and all the other moments of the game is making me antsy to play this again. Even though I don’t have a Gamecube or Wii to even play it on, I still own my hard copy of Thousand Year Door because that’s how much this game means to me. It’s a great RPG regardless, but there’s a lot that’s extra special about it to me.