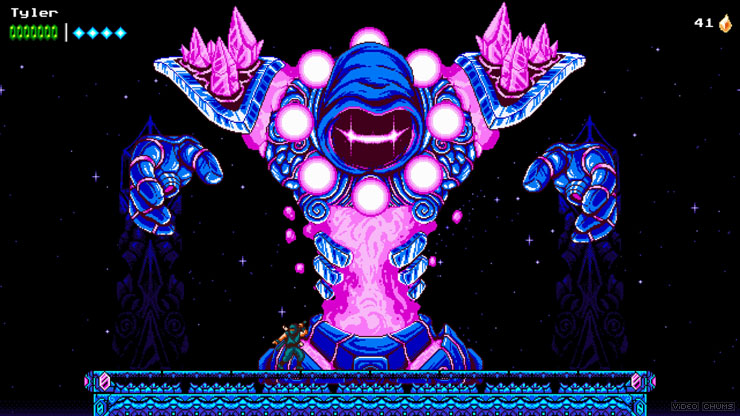 A 2D side-scrolling action platformer that hearkens back to the days of Ninja Gaiden and other games in that style. As the titular messenger, you progress through stages, acquiring new abilities that help you fight the enemies and bosses at the end of each level. The cloudstep is a unique traversal mechanic that gives you an extra jump after you attack something while you’re in the air. If you’re skilled you can use the ability to attack enemies from all directions and it makes for some fun and challenging platforming sections.

At the halfway point is when the game decides to blow all your expectations out of the water: a twist in gameplay changes the format from stage-based to an entirely connected world and it turns into more of a Metroidvania. From that point forward you have to explore all the nooks and crannies of the world to unlock new items and abilities, which allow you to get to even more new areas. It blew me away when it happened and instantly cemented it as one of my top games in recent memory.

Some games are just special from the outset and this one grabbed me almost immediately. First, the music is absolutely stellar. The background track of the first level was instantly catchy. The third level, though, is where I became enamored with the game’s soundtrack as it is an absolute bop. And then the theme to Searing Crags is just chef’s kiss. But wait! There’s more! After the mid-game twist, the two different time periods you can go between are made distinctive through not just a change in 8-bit to 16-bit sprites, but in 8-bit to 16-bit music. You get remixes of every track in the game: here’s Searing Crags’ 16-bit as an example! The seameless transitions between the different music styles made The Messenger’s soundtrack jump to an all-timer immediately.

The game itself is fantastic on top of the amazing soundtrack. All the bosses are fun and it has some of the tightest 2D platforming traversal of the modern era. While not completely focused on platforming as a game like Celeste, it still puts some decent challenges on the table. Also did I mention how great the humor is in the game? The character of the shopkeeper is an absolute blast and the relationship between the shopkeeper and the messenger is wonderful. Also you must give a listen to all of the stories the shopkeeper offers to tell you – you’re missing out if you skip them.

I played this game for the first time while on vacation with my girlfriend. It was my first time in NYC and we were staying in a tiny little AirBnB apartment. The days were filled with awesome sights and touristy travels while during my down time I rested my feet and pulled The Messenger up on my Switch. My finish of the game coincided with the end of the trip as I beat the final boss while we were riding the train home. I had an absolute blast in NYC and will forever associate this game with those good memories because the two are inexorably linked in my mind.

As for the game itself, I can’t oversell how great the soundtrack is. This soundtrack is probably one of the most played albums on my phone at this point. It’s an absolute chiptune masterpiece that never lets up. It’s perfectly exemplified by the final boss, which is probably my favorite moment of the game: one of the best songs on the soundtrack accompanying the best fight in the game.

I dare say that The Messenger is a modern classic. It’s a tight, fun experience that isn’t too long and lends itself to replayability. The DLC is also fantastic (here’s a sample of the DLC’s music – it keeps up the fire) and worthy additional content. And it was free!!! The Messenger was such a solid game that I instantly backed the studio’s Kickstarter for their next game – Sea of Stars – and cannot wait to see them knock that one out of the park too. If you have any nostalgia or interest in platformers/Metroidvanias/cool sprite-based games, you are doing yourself a disservice until you play The Messenger. It’s grand.