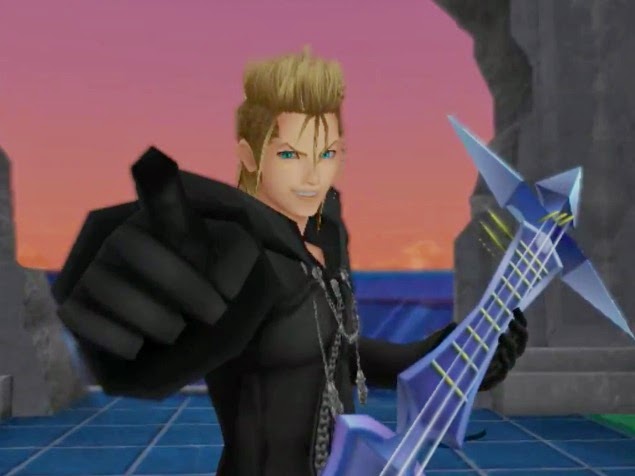 Before Kingdom Hearts as a franchise became an absolute convoluted mess that makes everyone who tries to explain it sounds like a conspiracy theorist, it was only a slightly confusing mess that made everyone who tried to explain it sound like a conspiracy theorist. When Kingdom Hearts II hit shelves, there were only two games in the franchise and so far the story was pretty straightforward. Organization XIII was introduced in the Chain of Memories spinoff and became the main villain group of the full sequel. It still focused a lot on Disney and bringing those worlds to video game life. But it also started the trend of “okay what the hell is going on in these games.”

At its core, Kingdom Hearts II is an action-RPG headlined by Sora, Donald, and Goofy. The basics are not super complex and the AI can be a bit wonky (fucking HEAL ME DONALD) but when you get to the high-level combat (especially the Data fights in the Final Mix version) it can be actually pretty punishing. KHII introduces new things like Drive Forms to make the battles a little more fun, but honestly why everyone played this was because of the multitudes of Disney worlds. And it had that in spades as well – from Lion King to Aladdin to Hercules, it has most of the worlds of the strongest 90s Disney movies.

Why It’s Important to Me:

I have a very specific thing that always appeals to me when it’s a thing. Namely a numbered villain group where each member has their own unique weapon/trait that makes them stand out. The Four Fiends from Final Fantasy IV. The Seven Deadly Sins. The Four Horsemen. The Forsaken (from Wheel of Time). The Sinister Six. The Chosen from XCOM 2. Or maybe one bad guy for each of the twelve Zodiac symbols. Or maybe using tarot card symbols. Bonus points if they’re revealed slowly and you build anticipation as to what their specialty is and maybe one of them has been under your noses the whole time. I don’t know why I love this trope but I do and I won’t apologize for it.

Organization XIII is probably my favorite iteration of this type of group and a big part of why I love this game so much. Each member of Organization XIII has their own personality, along with a unique weapon, style, and color (mostly). From Luxord the Gambler of Fate to Xaldin the Whirlwind Lancer, each one has an element and weapon they use when you fight them and they are some of the best and most memorable battles in any ARPG, in my humble opinion. Yes, a lot of people love Kingdom Hearts because of Disney, but honestly I’m there for Organization XIII and that’s all there is to it. I was excited to explore Disney worlds, but I can’t say I wasn’t more interested in finding out which Organization member was behind the Heartless debacle in each world.

Motherfucking Demyx, the Melodious Nocturne. He’s one of my favorite video game characters of all-time and I love him to death. He’s not a fighter, he’s a musician, and he’s super lazy and doesn’t actually want to do any battling or scheming. How he got into Organization XIII is anybody’s guess (seriously, I’m sure they explain it in one of the many future KH spinoffs that convoluted the story further but I’m not gonna unravel that thread) but he was instantly my favorite of all the characters.

I can immediately picture the battle where you fight him in Hollow Bastion, in fact the entire Hollow Bastion sequence in the mid-game of KH2 is probably my favorite setpiece of the entire series. It’s where the meme-famous “they fucking killed Goofy” scene comes from and everything about that section is just perfect. But I distinctly remember the Demyx fight and how much I just loved his intro. I can hear “Dance water dance!” in my head almost pitch-perfect. Here, take a look if you want to watch it yourself. Demyx is just the best (and it includes the famous Goofy dies scene as well for your amusement).

I love Organization XIII so much I have several art pieces of Demyx, Axel, and Xemnas that I put up on my wall (when I have wall space to have them). Kingdom Hearts II will forever be my favorite KH game simply because it has the best, simplest, easiest mix of ARPG fun, cool explorable Disney worlds, and the best iteration of Organization XIII (especially all their Data fights in Final Mix). However, let’s be real, the game is overall dragged down a little simply because of the absolute nonsensical turns it’s taken (and how Disney sort of ruined the Disney worlds with a tighter oversight in KH3). Still, in a bubble, KHII is an awesome game well worth the time to play it.

This week’s episode of Make Me A Gamer is an almost-laser-focused discussion! We start off with a quick food hypothetical posed by HarveyZ, followed by a short spoiler-full discussion of the new Netflix movie Velvet Buzzsaw (this discussion takes place from 10:30 to 21:26 if you wish to avoid spoilers about the movie). After that, it’s all aboard the Kingdom Hearts train as TMan tries to explain the whole plot of the entire series (not including Kingdom Hearts 3) to HarveyZ, a person who really knows absolutely nothing about the game. And while TMan is no expert himself, he does his best. We hope you enjoy, and we apologize for the lack of episode last week! We hope this was worth the wait! (This episode was recorded February 7, 2019.)

As always, thank you so much for listening and please leave us ratings and feedback however you’re listening to our podcast!