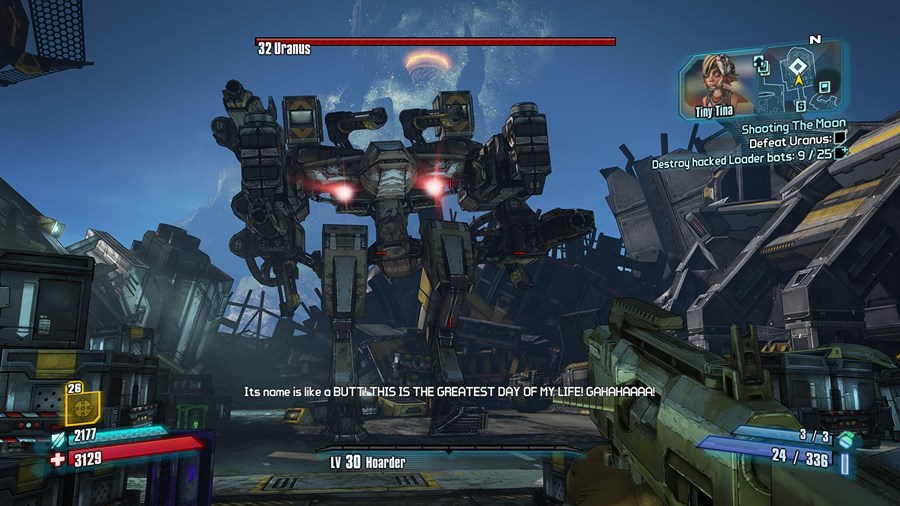 An up to 4-player co-op looter shooter that has a lot of humor and a lot of meme references. It builds on the world and aesthetic of the first game and promises lots and lots of guns. And it delivers. It also gives you four different classes (+2 DLC classes) each with 3 different skill trees so whatever playstyle you enjoy, you’ll probably find it in here.

Borderlands 2 is packed to the brim with characters, sidequests, story and just plain mayhem. It’s not a game that takes itself seriously at any point in its run-time. There are probably going to be characters that get on your nerves and other character who you’ll love to death. It’s not a game for everyone, but even if the humor isn’t your thing there’s actual surprising story developments thrown into the game as you progress to keep you hooked on the plot.

I played the first Borderlands solo and it was an entirely fine, if not easily forgettable, experience. Borderlands 2 remains one of my favorite co-op games simply because of all the memories I associate with it. I had a ton of fun with friends playing through this entire game, both in the base game and the DLC, and that just made the experience of the game’s wackiness that much better. It’s a game to joke around and shoot the shit during, screaming at each other when you flip over the fifth vehicle in a row accidentally.

But it wasn’t just the co-op. The game had some serious story beats that really caught me offguard considering how tongue-in-cheek the rest of the game is. It also makes the mostly silent protagonists of the first game into vocal agents of the plot that help you in the second, expanding on their personalities and making you grow to love them even more. Lilith will always be the #1 siren in my heart since she was who I played the first game as.

Have you ever gotten a text from two friends, panicked, because they’re stuck in a barn in a video game and can’t figure out how to get out? Well I have. They were both contained in a mutual hell of their own making: listening to Bandit Buzzards fly around the barn singing Ride of the Valkyries for twenty minutes before I logged into Borderlands 2 and figured out how to get them out of the situation.

It was an absolutely absurd moment – especially because they were simply missing a ladder and could have easily gotten themselves unstuck without my help – but it’s the first thing I think of when I think about ‘Borderlands’ as a whole. It’s this kind of co-op, friendly nonsense that makes me enjoy playing video games with friends in the first place.

Borderlands 2 is an odd duck. It’s a game I have a strong fondness for due to the experiences I shared with others. But it’s also a time capsule. I played Borderlands 3, co-op, with the same friend but we barely made it 6 hours in and never completed it. My tastes have changed a little bit and the gameplay (and humor) hasn’t developed in four games. It was enjoyable at the time and made a lot of memories I wouldn’t change for the world, but I also don’t know if I can ever go back to it. You can’t recreate the perfect storm and that was when Borderlands 2 existed for me. But I still must honor it in my top 100.