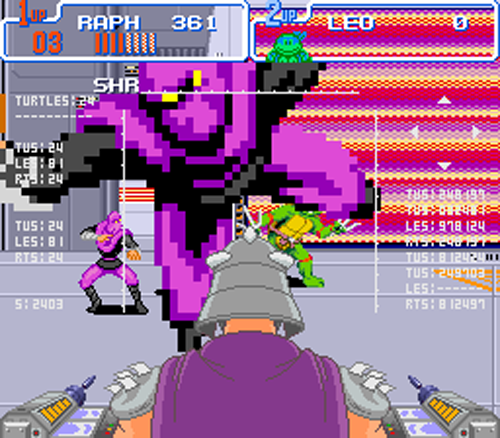 The Super Nintendo follow-up to the NES Turtle brawlers, which could also be considering the follow-up to the arcade game since this also had a version released as an arcade machine. Turtles in Time adds the fun mechanic of throwing Foot Soldiers at the TV screen which never gets old, but otherwise sticks to the same formula that other brawlers followed.

It doesn’t do too much in the way of innovation, instead it mostly just excels at doing exactly what it sets out to be – a fun brawler starring the Teenage Mutant Ninja Turtles. It includes classic villains as bosses like Baxter Stockman and Slash, stylizing the Saturday morning cartoon versions in perfect video game format. The traveling in time format adds a bunch of cool new level types to the game as well instead of just traipsing through Manhattan for the twentieth time.

As I said in my entry for TMNT 3, the Turtles were just a huge part of my childhood growing up. And Turtles in Time was just the perfect video game for anyone who loved the heroes in a half-shell and wanted to use their own turtle power. I played it in the arcade, I played it at home with friends, I played it whenever I wanted good co-op brawler action because until the N64 came out and Goldeneye became a thing, brawlers were the best way to play anything with friends.

I loved getting to see fully realized sprite version of Bebop, Rocksteady, and others that looked so much like their cartoon counterparts. Metalhead, one of my favorite random Turtle villains, even gets the spotlight as a boss in this game. And Rat King was riding the Foot Ski in his boss fight, a toy I owned. It was just fantastic all around and the game is pure nostalgia for my Turtle loving years.

I can hear all these quotes from the game in perfect cadence. It’s unbelievable how all the little sound bites from this game live rent-free in my head nearly 30 years later. And there’s the awesome music like Bury My Shell At Wounded Knee. And of course the final boss theme is an all-time great. If you love TMNT you can’t help but love this game because it’s the best of everything.

It’s Teenage Mutant Ninja Turtles. I’m just basically reiterating everything I said for the TMNT 3 entry, except in this game it’s perfected and turned up to 11. They even included the Pizza Monsters! C’mon, if this isn’t a love letter to all things 90s Turtles, I couldn’t tell you what is.