There are a lot of different types of RPGs when it comes to video games. You have your JRPGs, your WRPGs, your CRPGs, your ARPGs and your SRPGs, which can also be TRPGs. And these are just genres: this doesn’t take into account the favorite “with RPG elements” moniker that can be tacked onto any genre. (It’s a racing game with RPG elements! What does that even MEAN?!)

Today I’m going to talk about the SRPG (or TRPG) which is probably not only my favorite RPG genre, but my favorite game genre as well. Mostly because I’ve recently been playing two very good games related to the genre and want to talk about them and why these games make me happy!

This may be the first part in a multi-article series about each kind of RPG – I’m not sure yet. I definitely love all genres of RPG so it wouldn’t be hard for me to wrangle up opinions on all of them. But I make no concrete promises.

Anyway, let’s get started and learn about SRPGs! 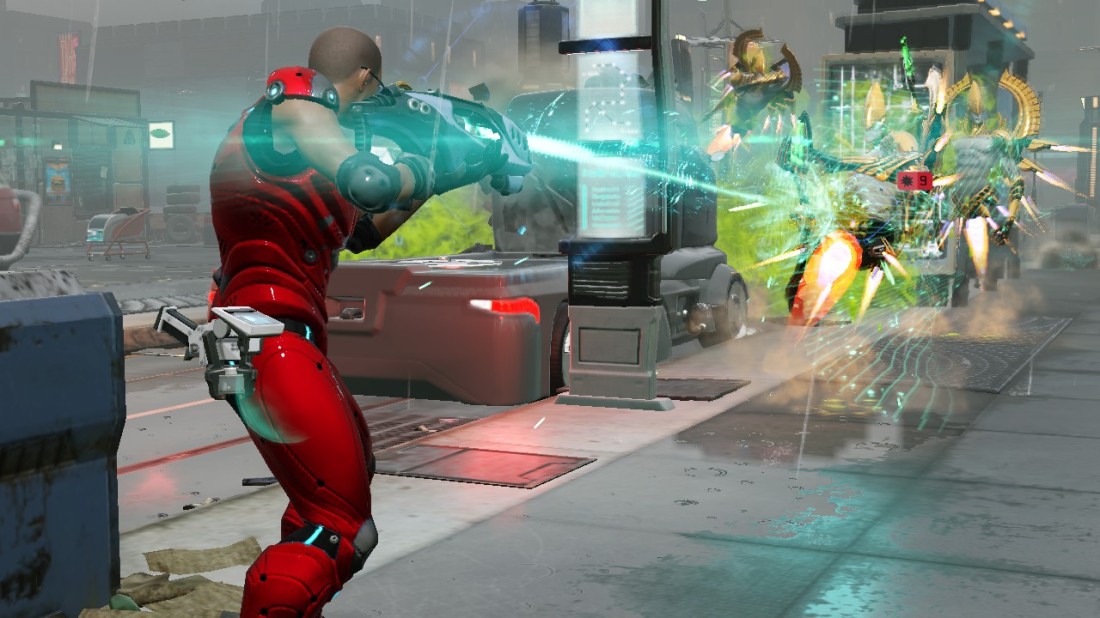 We’ll start with the basics: SRPG stands for strategy role-playing game. It is often synonymous with TRPG – tactical role-playing game – but some people will argue there are slight differences. I, however, am not one of those people and will be henceforth just be using the term SRPG as a blanket genre cover.

There are a couple static conditions that define an SRPG. First, the game is mostly battle focused. There can sometimes be a tactical layer between battles where you have to manage resources, train heroes, etc. – but there is rarely an overworld or any sort of map “exploration” like you would find in adventure games or other styles of RPGs. These battles are where the most significant portion of gameplay will be, and each battle is usually considered a long engagement that requires tactical thinking and planning, unlike JRPGs where battles are thrown at you fast and furious and in numerous quantities.

Secondly, these battles are grid-based a majority of the time, or have grid-based movement on an open battlefield. Sometimes vertical height is a factor across the grid, but is not always the case. The grid adds a tactical, almost board game-like feel to most battles. Maneuvering characters into the right positions and being in the right range to attack while simultaneously keeping a defensible position plays an important factor thanks to how maps are laid out on said grid.

Third, SRPGs are often turn-based. It’s not 100% of the time, but in general the focus is on thought and strategy for each battle, not how quick your reflexes are. That type of tactical consideration is much better suited for turn-based, untimed actions. This is partly why they get the strategy-RPG moniker.

Next, SRPGs usually have you commanding and making decisions for multiple units. It’s very rare to have a solo SRPG, as the player of an SRPG often takes up the mantle of a “Commander” or “Tactician” to oversee each battle. Managing each unit’s strengths and weaknesses end up being a huge part of deciding the outcome of a battle.

Finally, as with most any RPG, there are usually stats and/or skill trees to manage for each unit as you progress through the game. As you get more experience, units become more specialized in what they can do and you end up with more tactical options on the battlefield. They will also get more powerful – but so will your opponents, of course.

All these different facets end up blending together into a wonderful pot of strategy. Managing your squad(s) out of battle, choosing the right units to go into the next battle, forcing hard decisions and making you really, really think about your next move – that’s what SRPGs are all about. 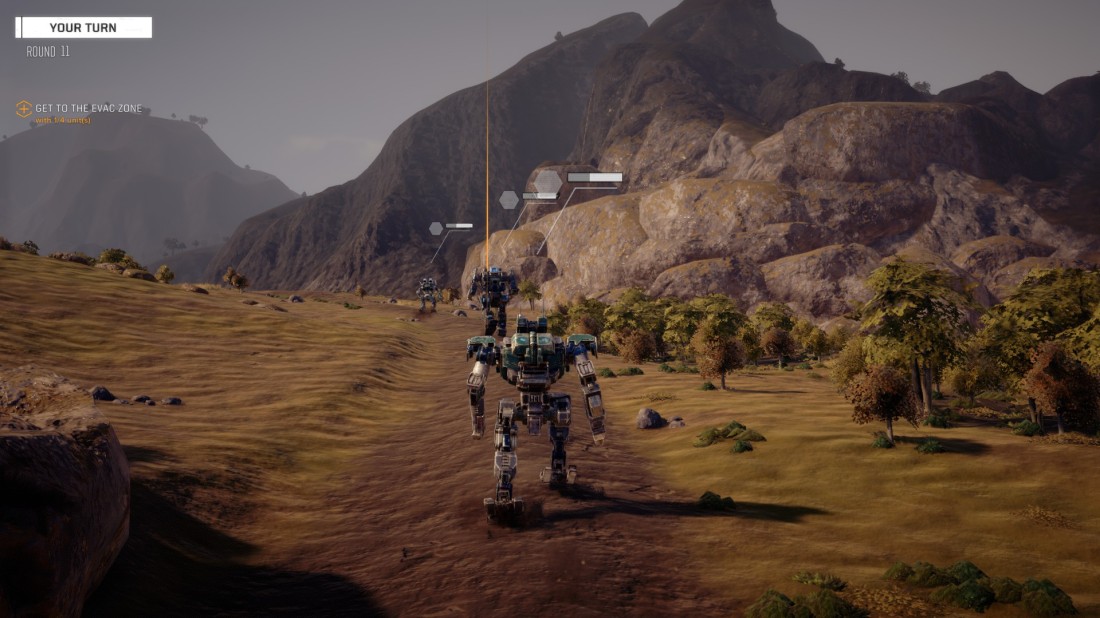 Now a lot of SRPGs include another feature that is a divisive issue – permadeath. It makes the choices you make with each unit have weight and consequences. If you get too aggressive and a unit gets out of position, enemies can surround and kill them – and then that unit is gone for good for the rest of your campaign. And if you’ve gotten into the role-playing aspect of the RPG, you could end up losing favorite units because of mistakes you make as a commander. It ramps up the difficulty and I personally love it – even though I will likely restart battles over and over in certain games (I’m a notorious restarter when I play Fire Emblem – I need to make sure every unit survives!).

Everything about these aspects are what make SRPGs my favorite genre. I’m a thinker and I like strategy – but not super complex strategy with lots of moving parts and rules I have to remember or management on the micro-level (see when I talked about 4X games). The tactical management of each battle and then choosing how my units specialize in the overworld management is often the exact sweet spot of what I like. I love the feeling of planning some sort of combo attack and executing it perfectly – and on the flip side I love the scrambling strategy of pulling out a victory when I’m sure I’m outnumbered and outgunned.

My first SRPG was Final Fantasy Tactics and it is a great first experience with them. While the story is dense and complicated, the mechanics are more forgiving than most SRPGs. Yes, there is permadeath, but when a character is knocked unconscious you have 3 turns to revive them before they’re gone for good – or if you finish the mission before the 3 turns are up, they’ll live to fight another day. Other series such as Vandal Hearts, Tactics Ogre, and Fire Emblem have also warmed my heart. The modern XCOM series, though, is the pinnacle of the SRPG – and yes, even though it is sci-fi and has guns and aliens instead of fantasy swords and magic, I consider XCOM in the SRPG line.

I’ve been playing two games recently and both on Wikipedia are classified as “turn-based tactics” games. One I feel falls under the SRPG moniker that I’ve talked about, while the other is close but not exactly what I want. I still am enjoying both games, but one is definitely scratching the SRPG itch more.

The first game is Wargroove – an indie game by Chucklefish, the makers of Starbound and publishers of Stardew Valley. It has a lot of the SRPG elements – turn-based combat on a grid and a campaign that consists primarily of battles with very little overworld management. However there are no skill trees and no real “role-playing” involved – all the units have static abilities and there’s no “progression” with any of them. 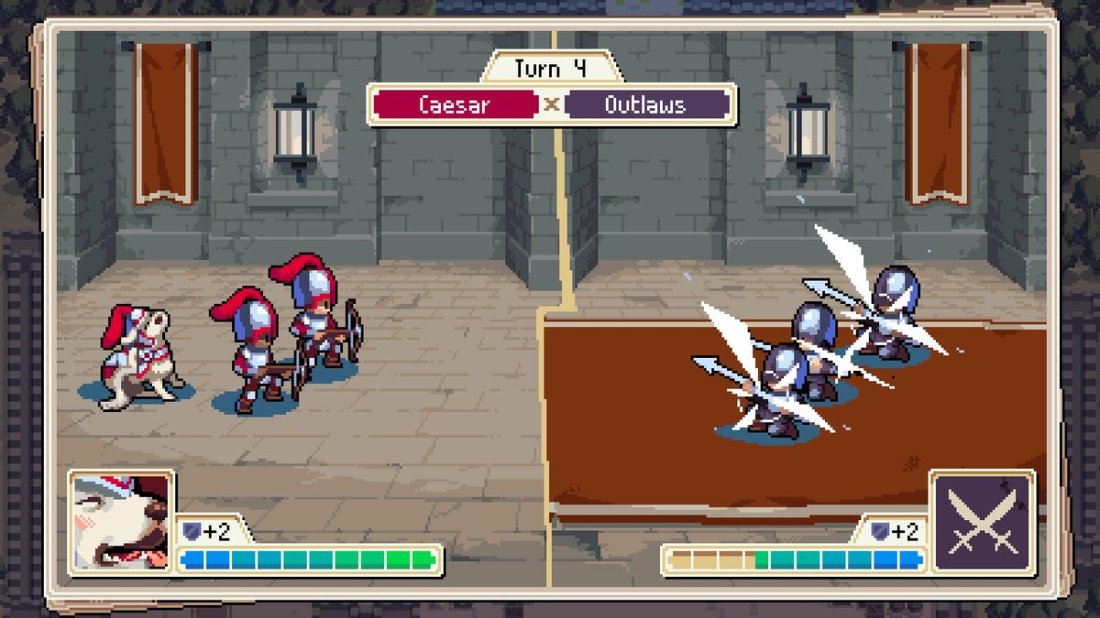 One of the commanders is a very good boy, though.

Wargroove shucks permadeath in favor of making units expendable – you can produce new units right on the battlefield most of the time (and is an important part of strategy). Instead of each unit having weight, there is one commander unit you have to protect each battle. Because of how you can generate a new unit each turn (if you’re producing enough money), the battles tend to play out more like high-octane chess matches. You move your units around the board and sometimes have to sacrifice pawns in favor of protecting your King piece.

In this way, Wargroove doesn’t quite hold the same emotional impact that SRPGs usually have for me. I’m not really attached to any characters (even though the commanders have a campaign story) and I don’t really care if I send units to die. It’s very tactical and fun because all the strategic battle stuff is there. But it’s missing that special something that gets me attached to characters like XCOM or Fire Emblem.

The other game I’ve been playing is Battletech, which is much more in the SRPG realm. In this game, you play as a customizable commander of a mercenary squads of mech pilots who do odd jobs on different planets. The battles are turn-based on a kind of hex grid, and you can have up to four mechs in each battle. Each type of mech has different types of weapons and abilities – some are better as scouts who run away from danger, others are better at raining down missiles from long-range, and some have destructive energy beam weapons that threaten to overheat and damage your mech if you use them too often.

The typical battle screen from a Battletech mission.

On the overworld screen you’re managing your crew’s monthly salaries, monetary and mechanical upkeep for your mechs, and paying off student loan debt (okay, it’s not student loans but its in the same ballpark – banks are bad even in this universe). You have a limited number of troops and they each gain experience and can progress down different skill trees. You also have a limited number of bays for your mechs and you can only repair one mech at a time, so you have to be tactical in how much danger you put your mechs in on each mission. Refitting your mechs with new weapons also takes time – basically every decision carries weight in this game.

The fact that I have a very small crew to take on each mission has already gotten me attached to my characters. And while they aren’t customizable like in XCOM, they’ve all got personalities and backstories and even after only playing for a few hours, I feel like these people are “my” crew. So when at the end of a long mission when the last enemy mech got a lucky critical shot and destroyed the cockpit of my favorite pilot’s mech, I actually said “Nooo!” out loud. (Thankfully she didn’t die, she’s only in medical for the next 110 days.)

So while Battletech is also classified as “turn-based tactics” like Wargroove, I think it can be classified as a full SRPG. Especially because as days pass during the overworld screen as you travel from planet to planet, little scenarios pop up that can affect morale. Do you pay money to get extra medical supplies? Do you force your crew to move a bunch of crates to allow your mechanic to operate on mechs faster? These little decisions make you actually feel like you’re commanding your scrappy little mercenary squad.

I highly recommend both Wargroove and Battletech as they’re both very fun, very competent, very polished games. Wargroove is a great gateway game into the larger strategical genre – without the looming threat of permadeath over each battle, it allows for more experimentation and is friendlier to new people. Battletech, though, is awesome for a more well-versed tactics game player- it’s one of those games where you’re having fun from mission one, but by mission five you’re actually getting a hold of all the complex mechanics and formulating better strategies. And the starting difficulty takes that into account, making for a very gradual and welcoming introduction.